“Now let me welcome everybody to the wild, wild west
A state that’s untouchable like Elliot Ness
The track hits ya eardrum like a slug to ya chest…California”

Welcome to my first respin – that is re-releasing a story that I posted on an earlier (defunct) version of my blog.  This one is from 2015.  I hope ya’ enjoy it…again.

Ya’ know, I’m amazed that at times just having a camera with me seems to magically create photo ops.  Case in point – I’d been shooting street photos in downtown LA earlier in the day and decided to finally track down a vegan cheese shop located somewhere near Sunset Blvd.  Vegan cheese?  Why not?  Of course, I had no real idea of exactly where it was, but let’s face it, that’s what Google Maps is for.

Since this is LA after all, parking at the shop was probably wishful thinking, so as I approached the GPS’d location, I took the first parking spot available and decided to walk the last block or so.  That’s when I saw these guys…or rather heard the rap music accompaniment just before seeing them.  At first glance, I really wasn’t sure what was going on.  There appeared to be two house painters painting a wall to the beat of (very) loud rap music.  Maybe the scene warranted a shot or two, but well…it just wasn’t that unusual, I thought.  That is,  until I got closer and realized that the rhythmic house painters were creating a mural and the music was just part of the show. 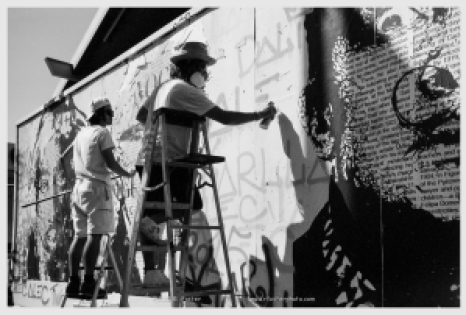 Well, that’s LA for ya’…nothing like spontaneous performance art to brighten the day!  Instant Photo Op! I immediately began  taking pics.  The large individual in the suit asked who I shot for.  My response, “Me!”  He was evidently part of the crew – bodyguard, agent, lookout – I wasn’t sure.  I didn’t care.  I gave him my card anyway.  It’s LA.  Ya’ never know…Right? 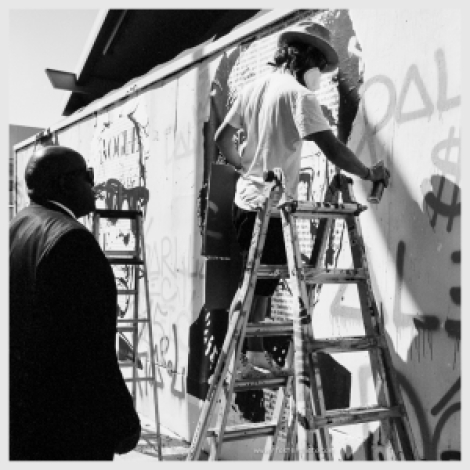 It was fascinating watching & photographing these guys doing their thing!  “Ordered Chaos with theme music” is how I’d describe the scene. The two seemed to have a plan as they were very rapidly (& rhythmically) creating another uniquely LA visual point of interest.  By the way, the primary artist is known as Alec Monopoly.  I still haven’t deciphered the actual message the mural was designed to send, but the end result is a very cool artistic statement.  Now all I have to do is figure out what Tupac Shakur, Karl Lagerfeld, and Salvador Dali have in common – and, at some point, find that damned vegan cheese shop.  I’m sure it’s somewhere near there…maybe?

I am a Los Angeles based photographer specializing in Street, Urban, Portraiture and Landscape images View all posts by rfosterphoto